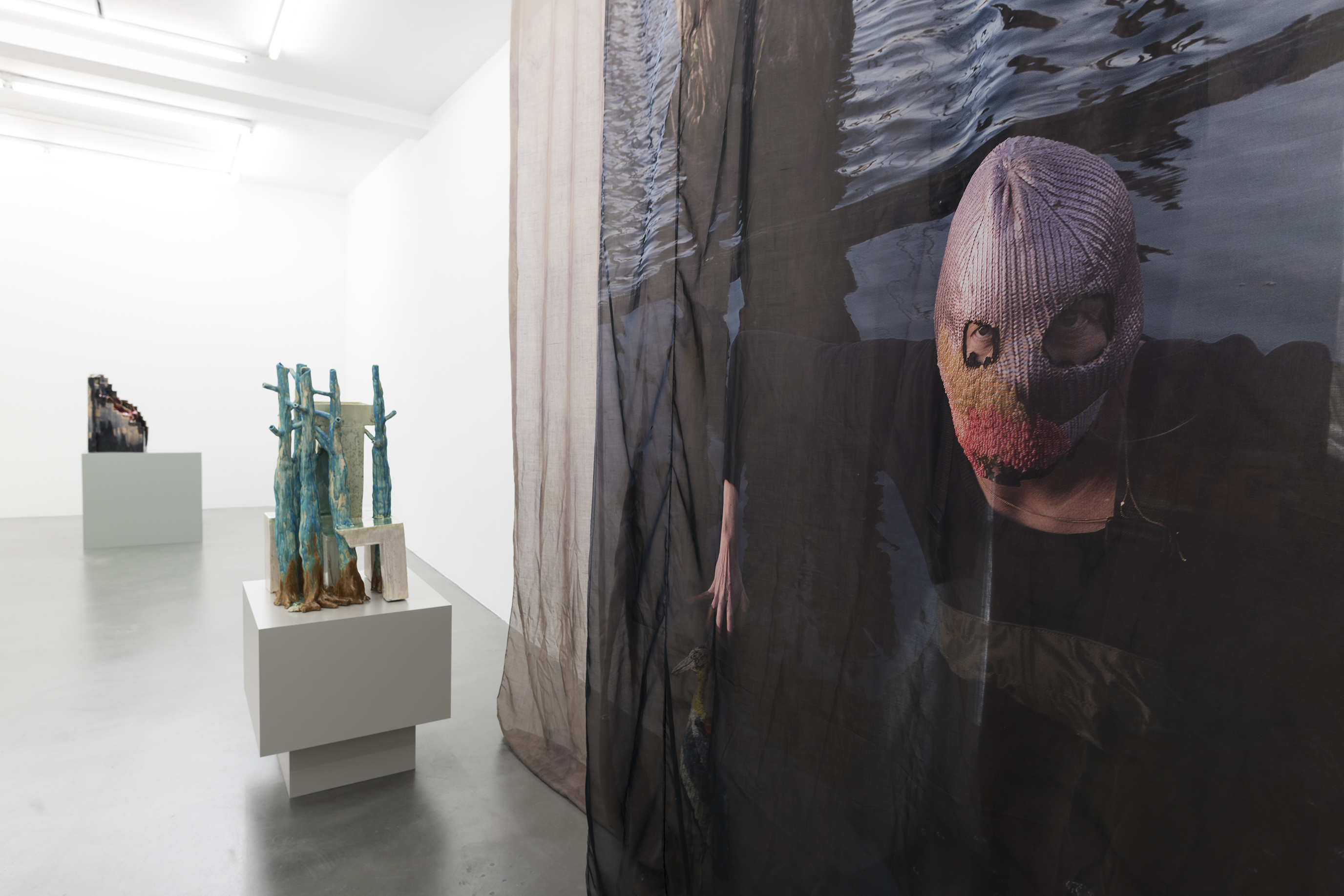 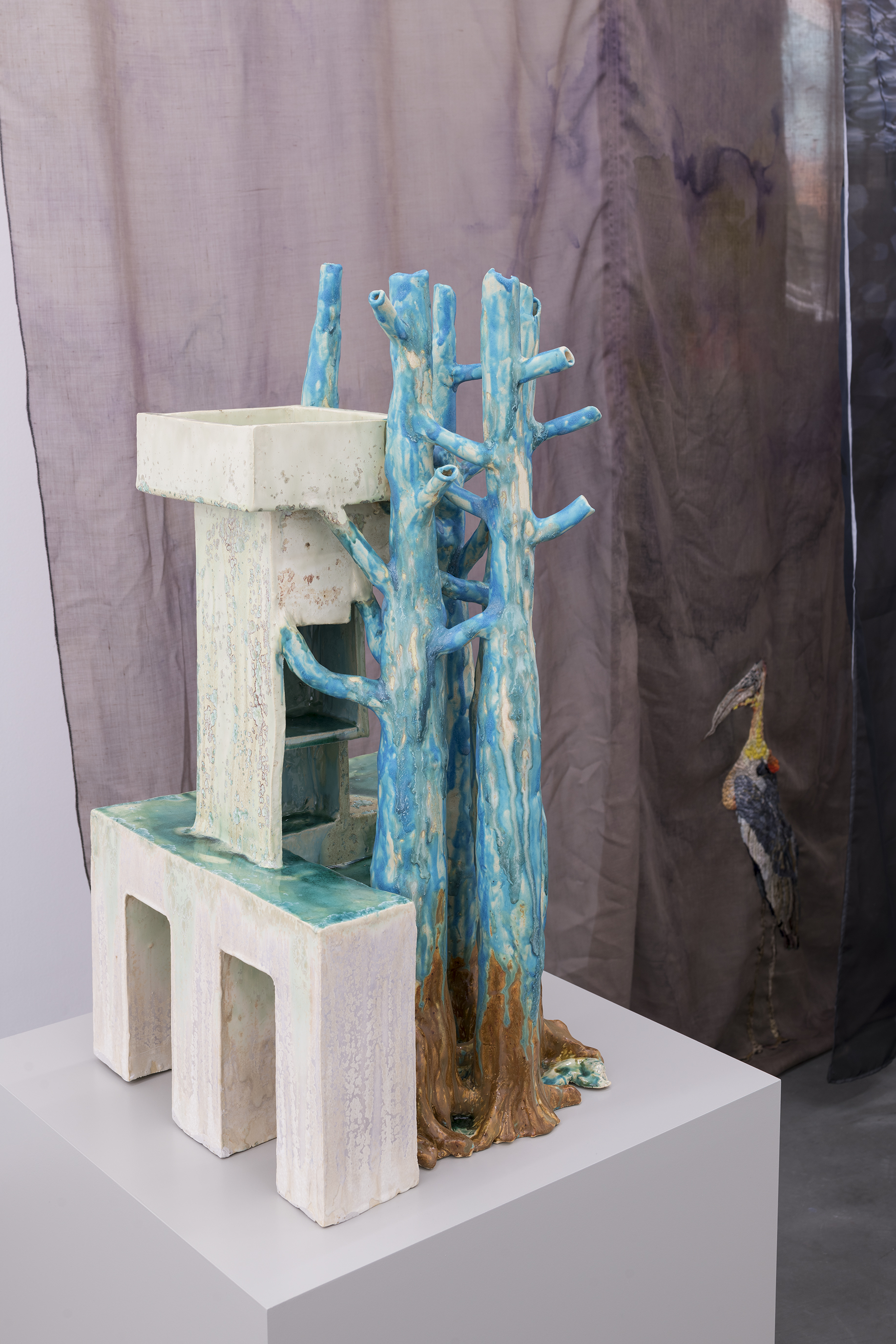 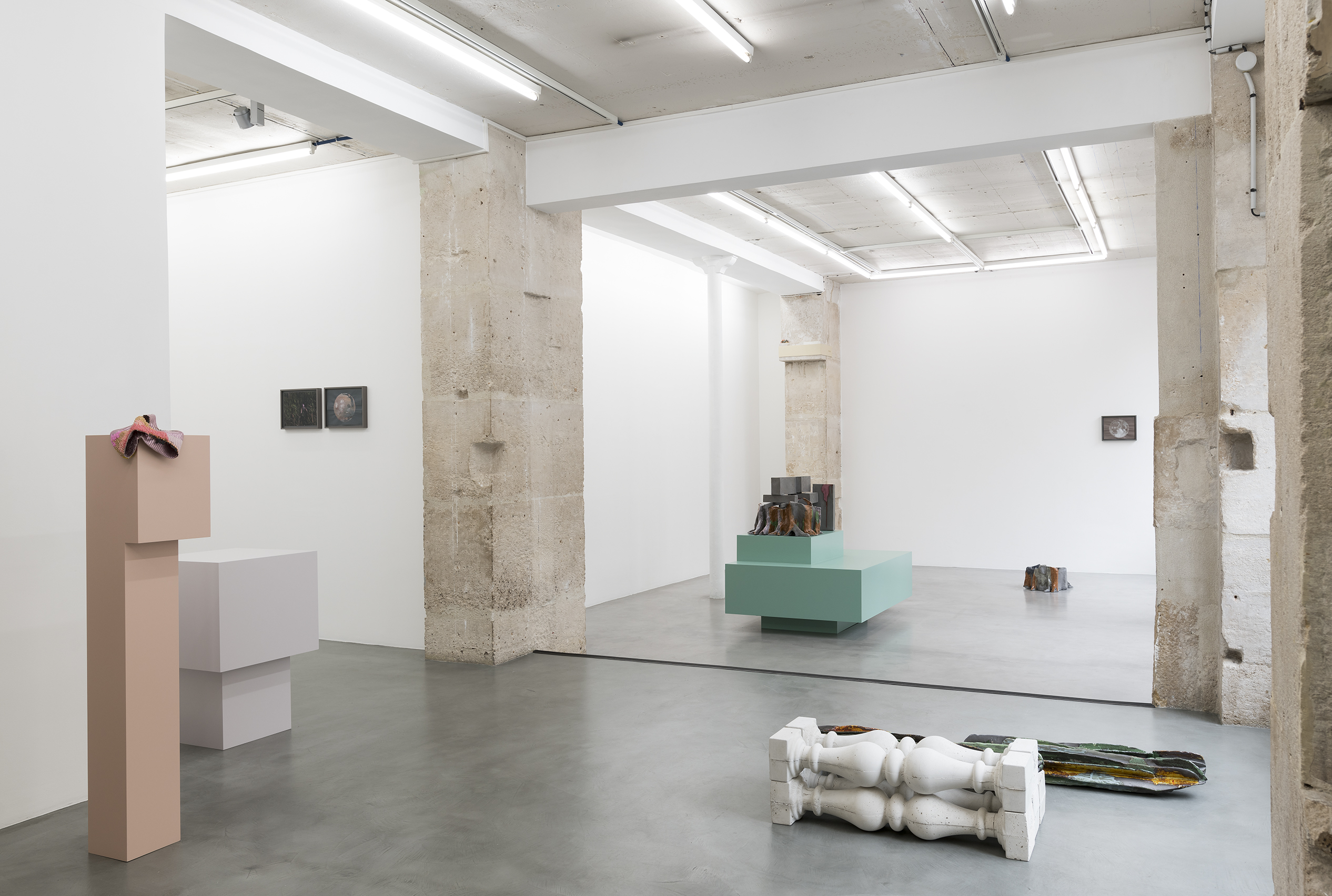 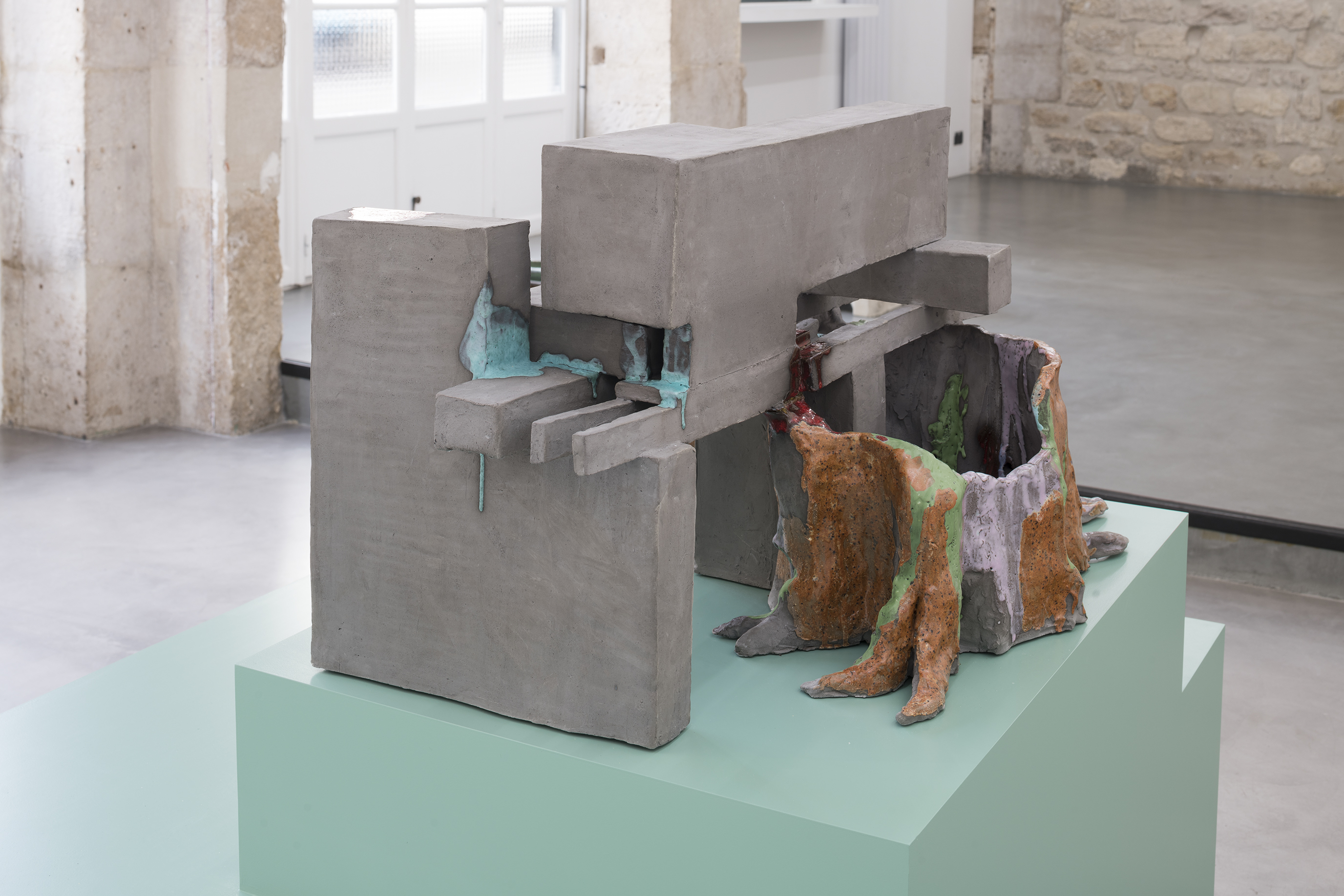 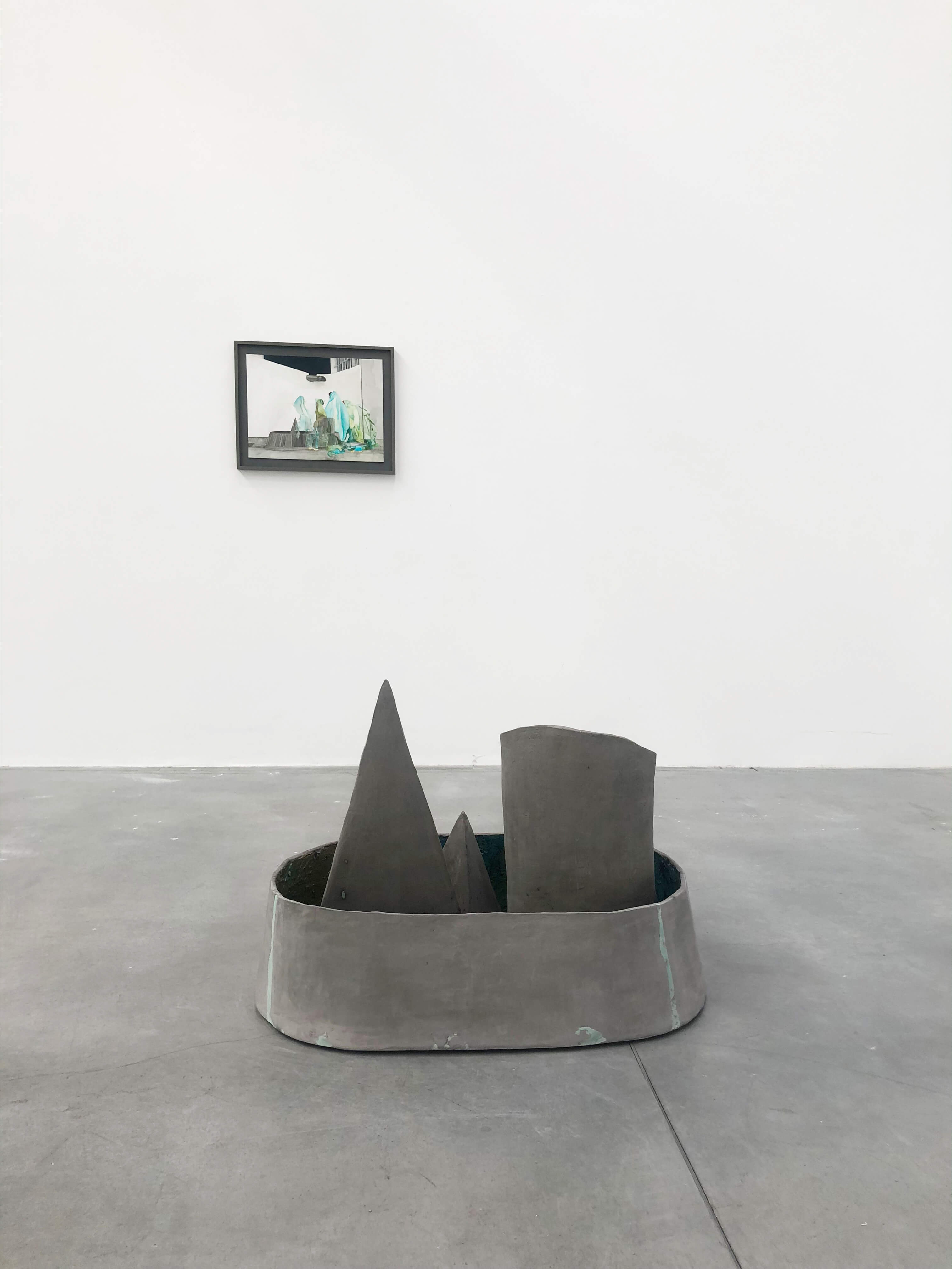 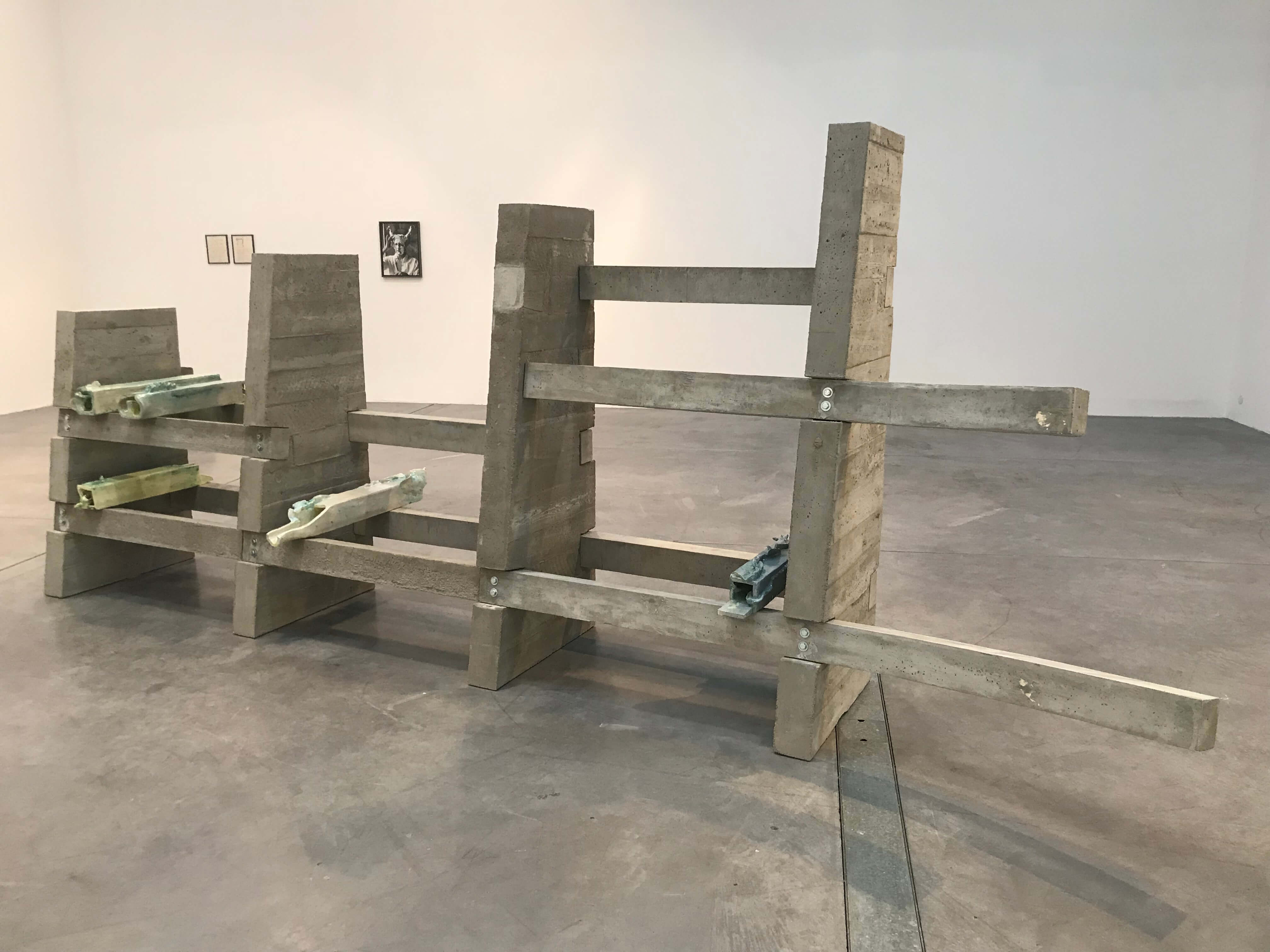 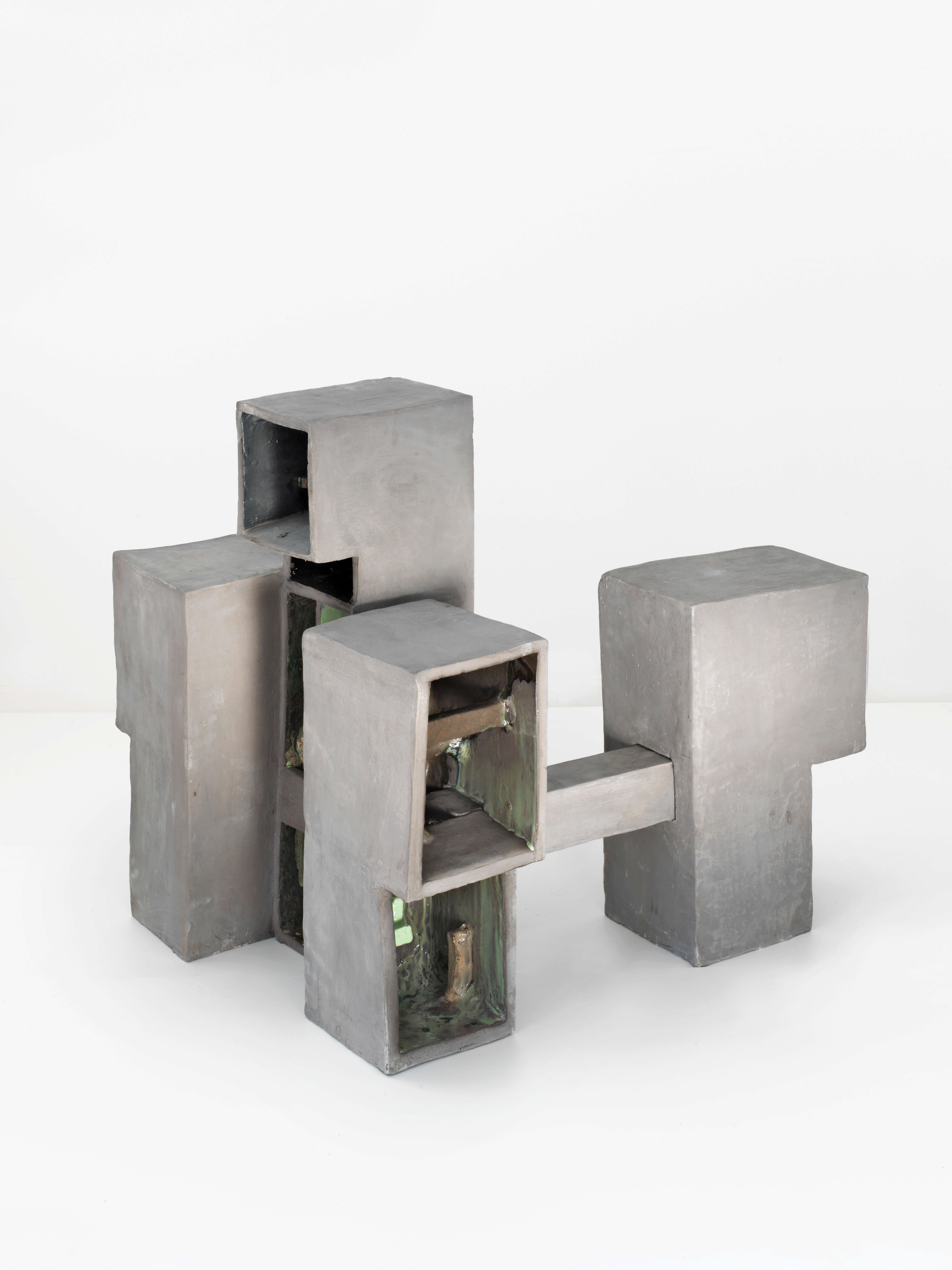 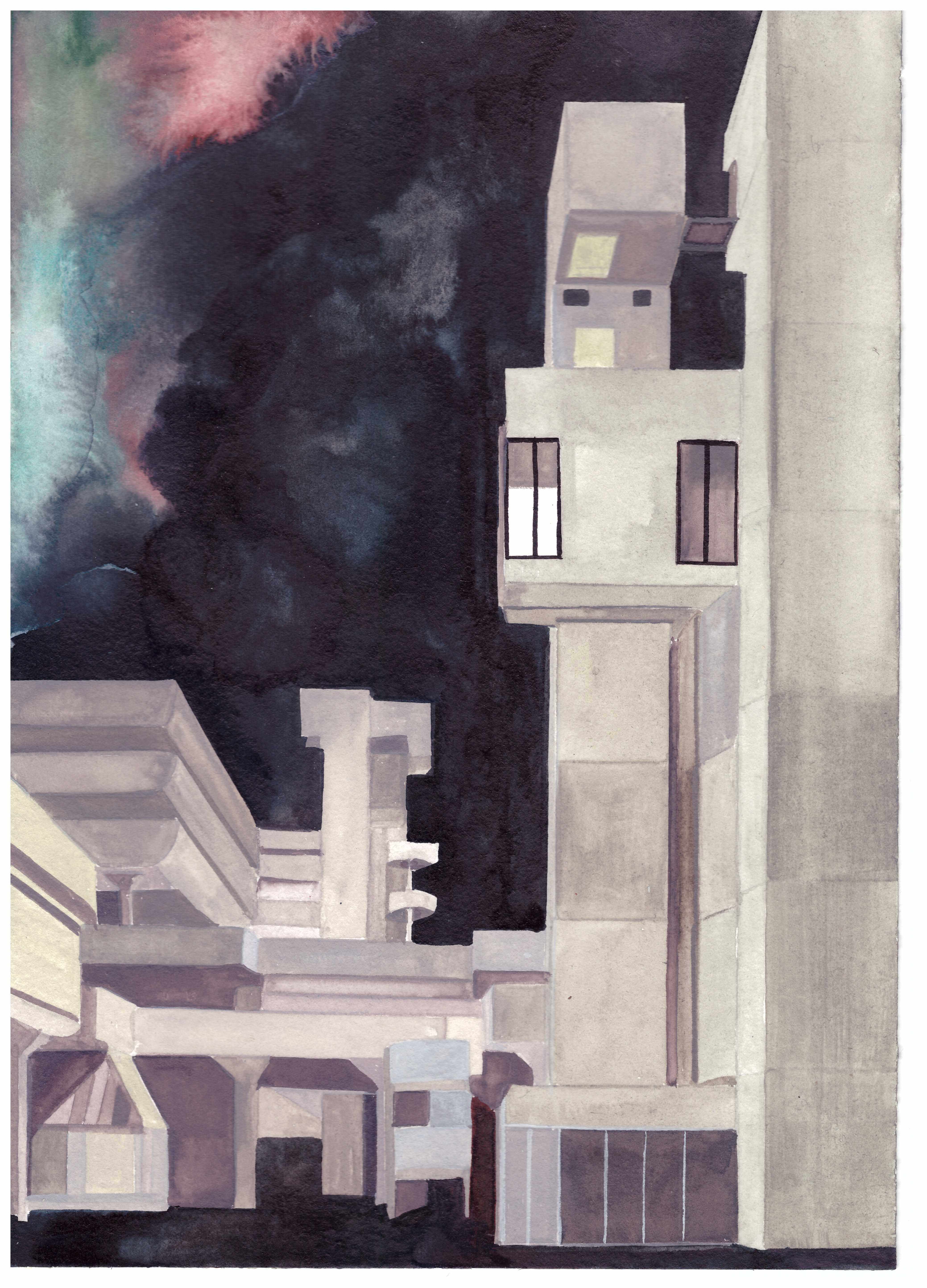 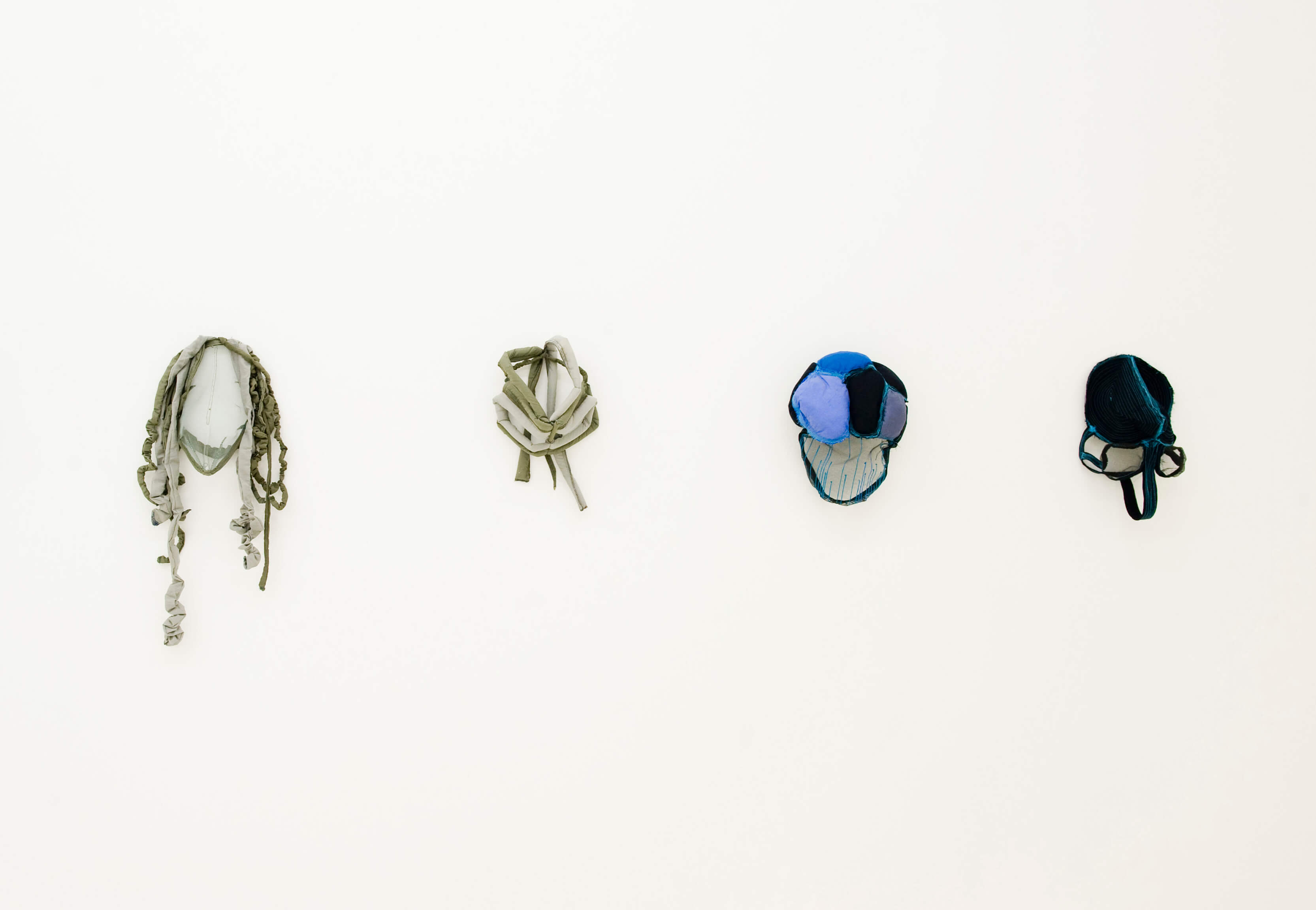 Isa Melsheimer, Trekking Masks II, III, IV and V (from the left to the right), fabric, wire and thread, unique, approx. 40 x 20 x 26 cm each. View of the artist's personal exhibition 'We live in townscape and, after a trek, we shop in Futurism' at art3, Valence, France, 2018 (photo: Thierry Chassepoux). 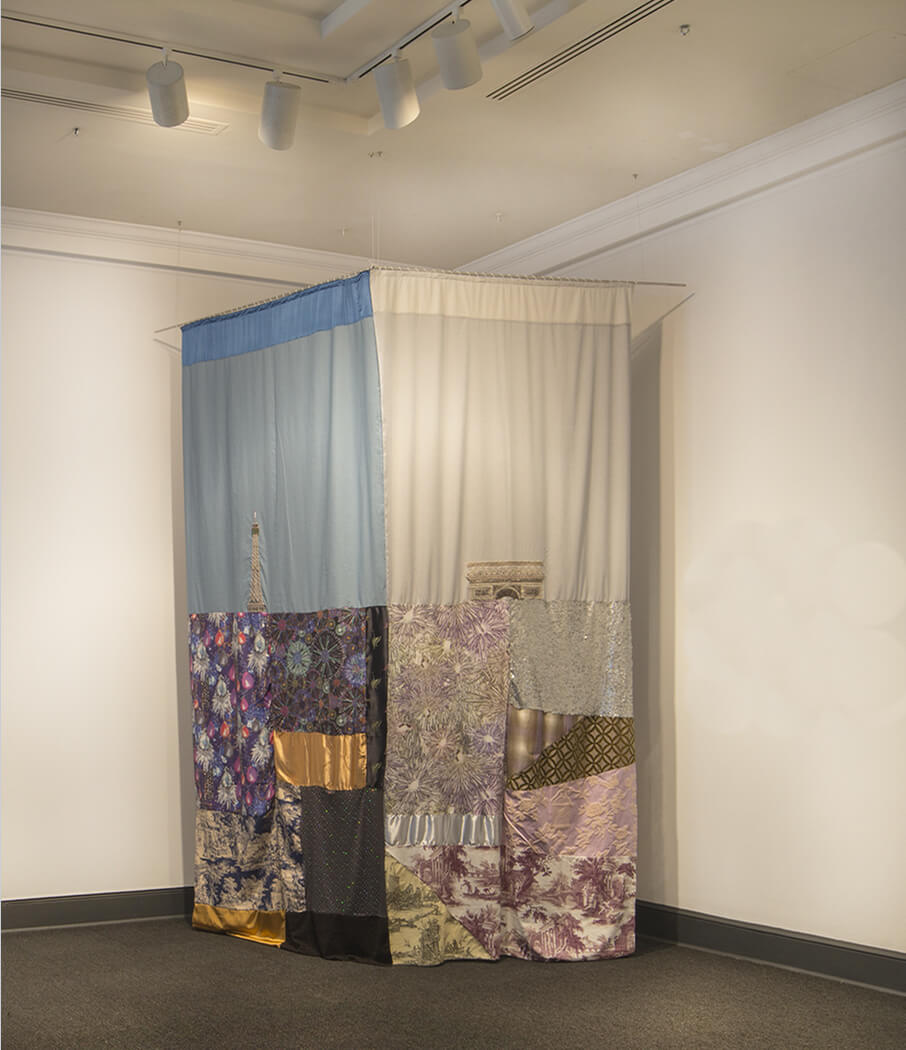 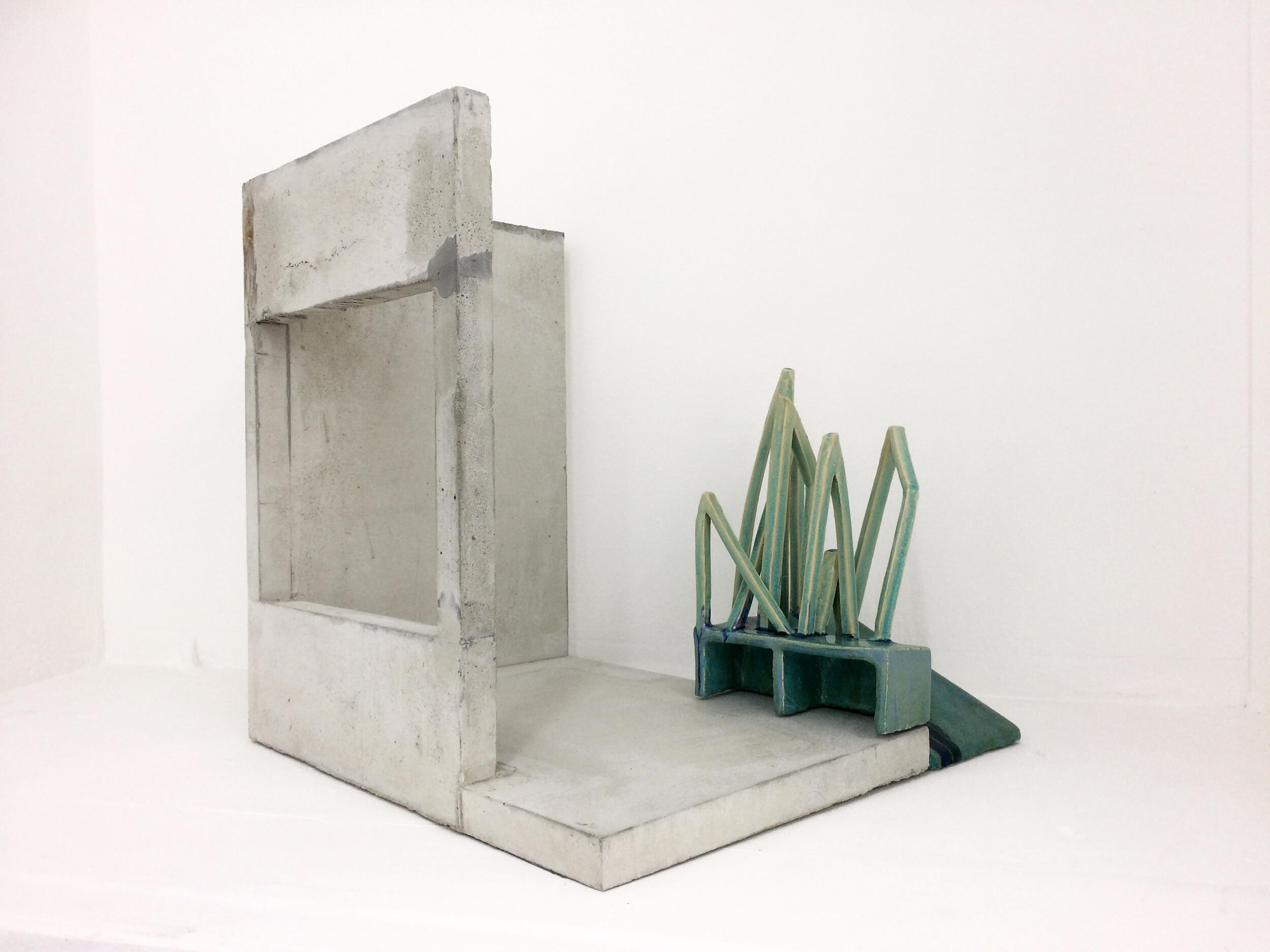 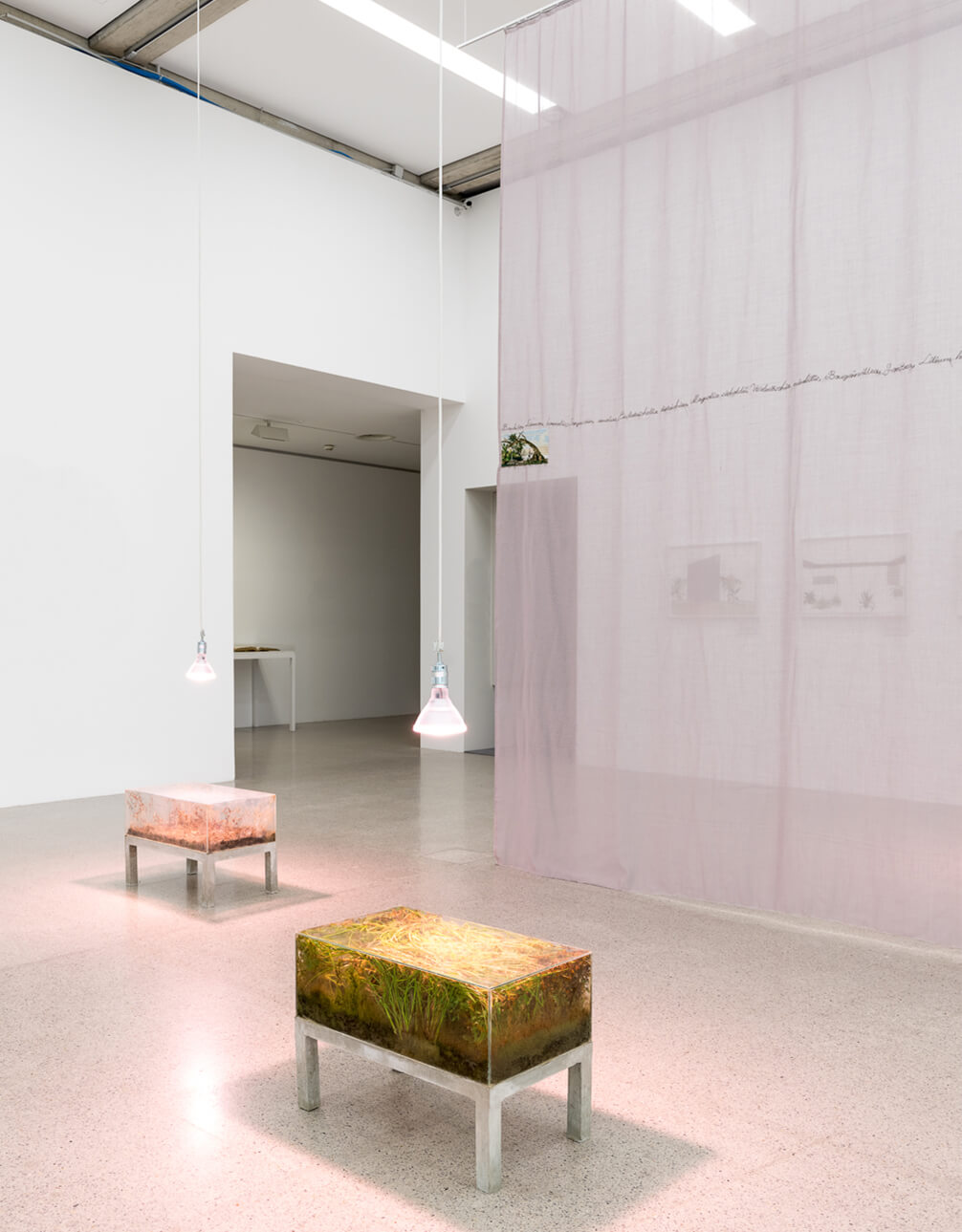 Born in Neuss, Germany in 1968
Lives and works in Berlin, Germany

Le Corbusier, Mies van der Rohe, Norman Foster, Superstudio… Architectures which convey ideals, with the heavy responsibility of formalising theories, depicting utopias with wood, glass and concrete, and, above all, of placing them at a living, human scale: such is the basis of Isa Melsheimer’s reflections. However, she does not approach them from a nostalgic angle, but instead an analytic one, as though returning to the fundamentals, again and again, so as to extract the essence from them. Quite often, visions change into illusions, and this German artist’s work is not particularly optimistic. The materials lean more often towards fineness: textiles, which are clearly present, do not come over as conquerors, but instead as worn objects — mattresses, tee-shirts, etc. — with an apathetic limpness; veils and curtains no longer embody the theatricality they are often relegated to, while paint appears in its washed-out form of watercolours. When concrete or ceramics do come into play, this is always in a reduced format, as objects or models, as if the artist were denying their greatness.


If Isa Melsheimer generally brings out her explorations in the places where she exhibits, then the point is to consider the world all the better from their vantage point. They are not the empty shells, which she focuses on as an institutional critic, but instead they act more as watch towers.

Times are hard, but Postmodern


it's the scenery that moves


Anything Goes? - Berlin architecture in the 1980s


The Year of the Whale