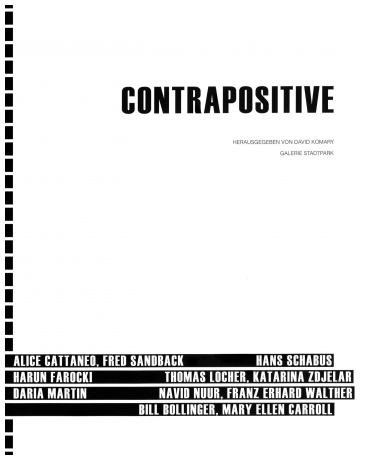 Contrapositive David Komary (Ed.) Galerie Stadtpark, Krems, Austria with contributions by David Komary German/English, 144 pages, numerous illustrations in colour, 19 x 23 cm, softcover 2014 The publication Contrapositive takes seven exhibitions shown at the Galerie Stadtpark between 2012 and 2014 into account. Contrapositive is to be considered a sequel but also a counterpart of the 2011 published catalogue Coprime. While in Coprime the concept was still composed of the constellation of two artistic positions, single positions have been taken into account since 2012. The format of solo exhibitions is caused by the visual and auditive immersion of running-frame-based artwork, which excludes the display of two installations at the same time. Contrapositive operates as a superordinate pubilcation, that not only documents particular installiations but questions the connections and interferences between these exhibitions on a level besides the exhibited dispositives. Through this the meta-structures of the tripartite program-thread are made evident. A novelty in the exhibition strategy of the Galerie Stadtpark but also a specific of Contrapositive is the confrontation of established, historic positions and current, contemporary artwork. This form of comparism first gained attention thourgh the exhibitions and in between (Thomas Locher and Katarina Zdjelar), followed bycontrapositive (Fred Sandback and Alice Cattaneo), short term stability (Navid Nuur and Franz Erhard Walther) and concrete deviation (Bill Bollinger and Mary Ellen Carroll).