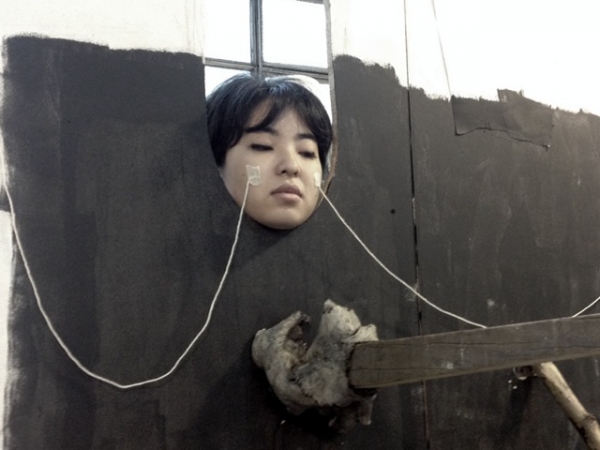 Diego Bianchi, On On On Indetermination, view of the performance, 2014 We are very pleased to present a series of new sculptures which are assembled to a situation and complemented by a performance created by the Argentinian artist Diego Bianchi. On On On Indetermination is a theatrical scene stopped (not frozen just stopped as an open non time moment) where objects and sculptures are on a same level as a body, parts of a body, and small movements of a body. Three performers of different racial origins will be involved in this scene. The performers have to play each day a different role. The main narrative situation is a person on the floor “posing” in unnatural postures (between a posed or accidental posture) having an abstract relation with the sculptures and objects in the scene, this person is doing small and imperceptible movements all the time. In one of the walls, there is a face just appearing, looking at the situation and working with mouth gestures or speaking in chinese. On the opposing side a person is appearing on the top of the wall working with eye gestures and also talking sometimes in his/her language. **Artist statement** Come upon your own waste as if it were absolutely unknown. As if the value of things resided in their potential handling and in their ability to witness indolence, use, and decay. Some tiny possibility of endurance. The soft power is intense: that which bends and yields endures. A frozen theatrical situation is a dismantled fiction. Persons and objects squandering time, inserted in the logic of an absurd dialogue that holds them together before the void. For years I have observed the transformation of daily consumer items after being used. I have observed the inter relationship between nature and social behaviors, the rise and decline of urban and biological situations, the catastrophes, accidents and randomness generate unheard versions of order. The traces of usage or the passage of time and the heuristic of objects. (Diego Bianchi)